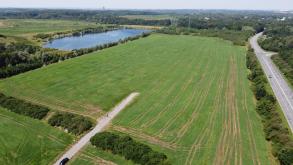 The success story of the František brownfield began in 2005. Over the course of the 20th century, the former František Mine produced millions of tonnes of coal, employed thousands of people and fundamentally changed the face of the village. After its closure in 1999, the site’s potential seemed to have been exhausted. But the opposite was true. The municipality of Horní Suchá, faced with high unemployment and the threat of a devastated site, immediately took the initiative and began to work to transform the old mine into a modern industrial zone. Environmental reclamation was followed by investments in new technical infrastructure and communication systems. The municipality was the first self-government in the country to use the programme to support the regeneration of the area - and its efforts were crowned with success.

The revitalized František with an area of 14 ha was declared “Brownfield of the Year 2009” in a competition organized annually by the Ministry of Industry and Trade and the CzechInvest agency. Currently, 25 companies employing 300 people operate in the zone. At present, the Asental Group, in cooperation with the municipality of Horní Suchá, has extended the boundaries of the František zone by adding 30 ha of adjacent land to create the current František II development area. In addition, there is still another 30 ha of development potential.

Horní Suchá municipality, 5 km from the centre of Havířov

Characteristics of the territory:

brought to the boundaries of the property

The ability to address the temporary and long-term administrative and warehouse needs of investors within the Asental Group’s real estate portfolio.